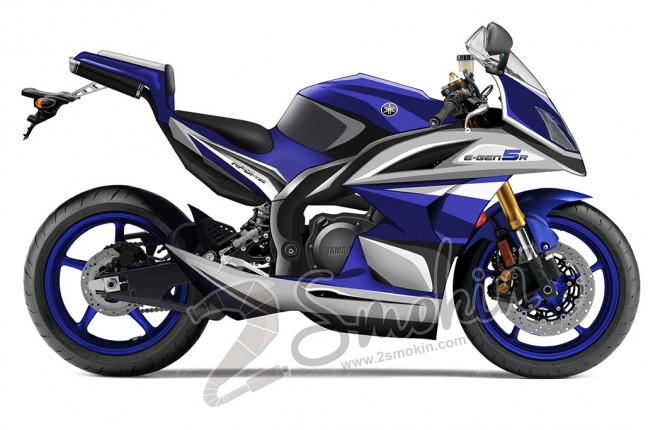 Does anyone miss the days of seeing 2-stroke street bikes like NSRs and RGVs rolling off the showroom floor?

As we all know, the presence of 2-stroke street bikes in most of the major manufacturer’s lineups has basically diminished, other than road-registerable enduro bikes. The heightened emissions laws and the “environmentally unfriendly 2-stroke” saying has been a stigma that has influenced the general public’s opinions on humble 2-stroke. But what is to say that there isn’t still a place in the market for them? There is a thriving market for 2 strokes in enduro, as well as the marine industry and snowmobile industry, with direct-injected engines offering great performance and low emissions! So what’s to say that this technology can’t be introduced into street bikes? 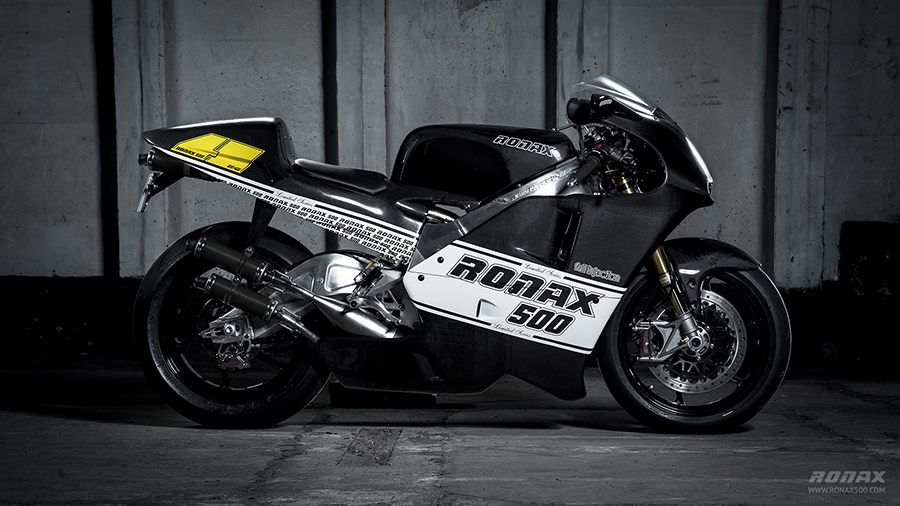 I think its safe to say that most 2-stroke lovers draws dropped at the sight of the magnificent, fuel-injected Ronax 500. With GP performance and more power than you will ever need on the road, it definitely falls into the dream bike category. However most of us don’t have 100,000 Euros lying around to throw at a bike! So lets say that Yamaha re-introduced affordable, environmentally friendly 2-stroke street bikes at comparative pricing with 4-strokes, what could we be looking at? My theory would be the two bikes shown below. (Click the images to enlarge) 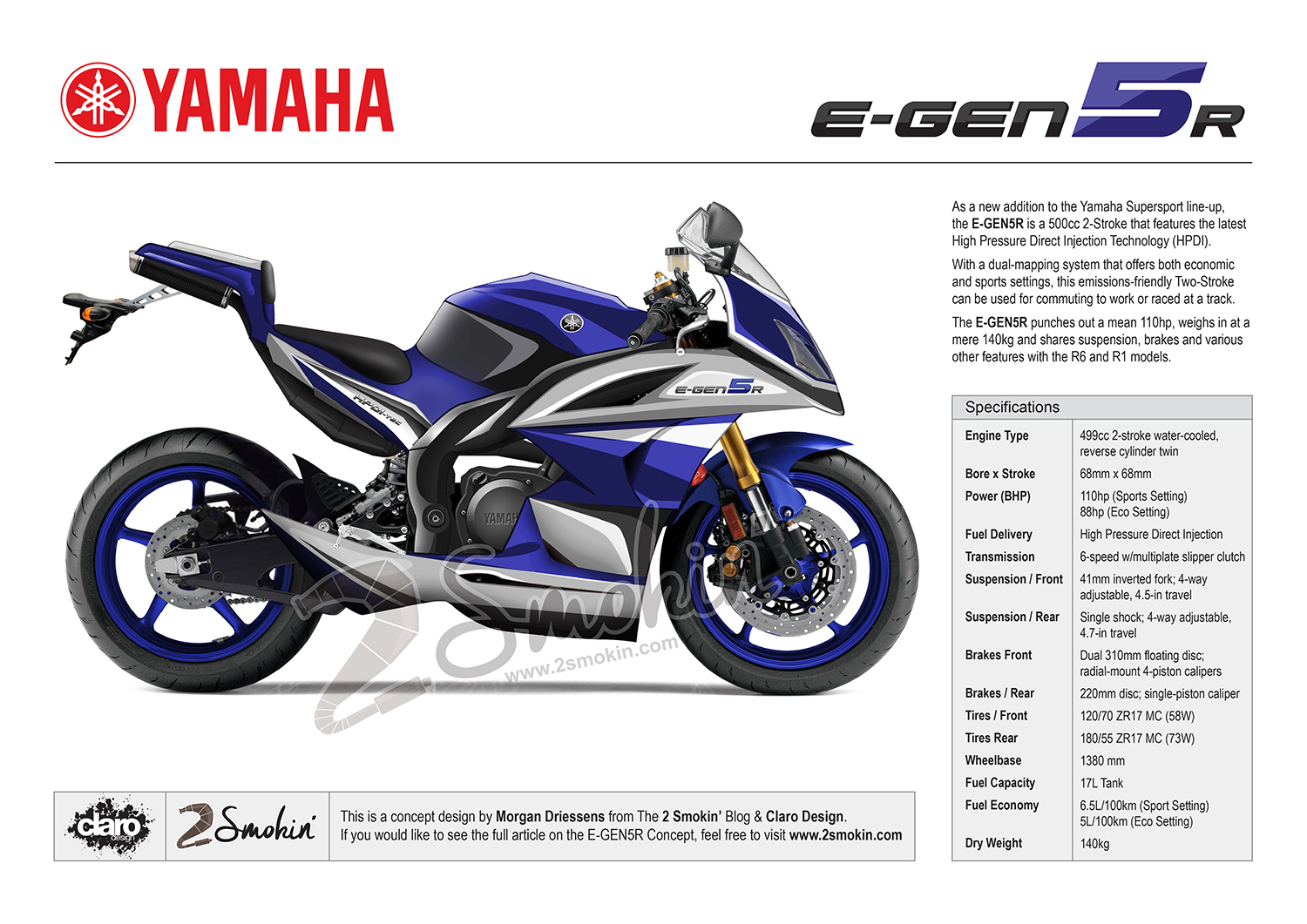 This is my interpretation of a modern, direct-injected 2-stroke twin sports bike, the Yamaha E-GEN5R. It would feature a reverse-cylinder, 500cc engine, equipped with dual mapping system; economical mode and sports mode. Aimed at those who like a light-weight, agile bike, as well as those who love the sound of a crisp 2-stroke, this bike shares similar parts and styling to the R6 and R1, eliminating the need for Yamaha to develop every part from scratch. It would fall into a similar category as supersport bikes, offering exhilarating performance on the track as well as economy on the road. 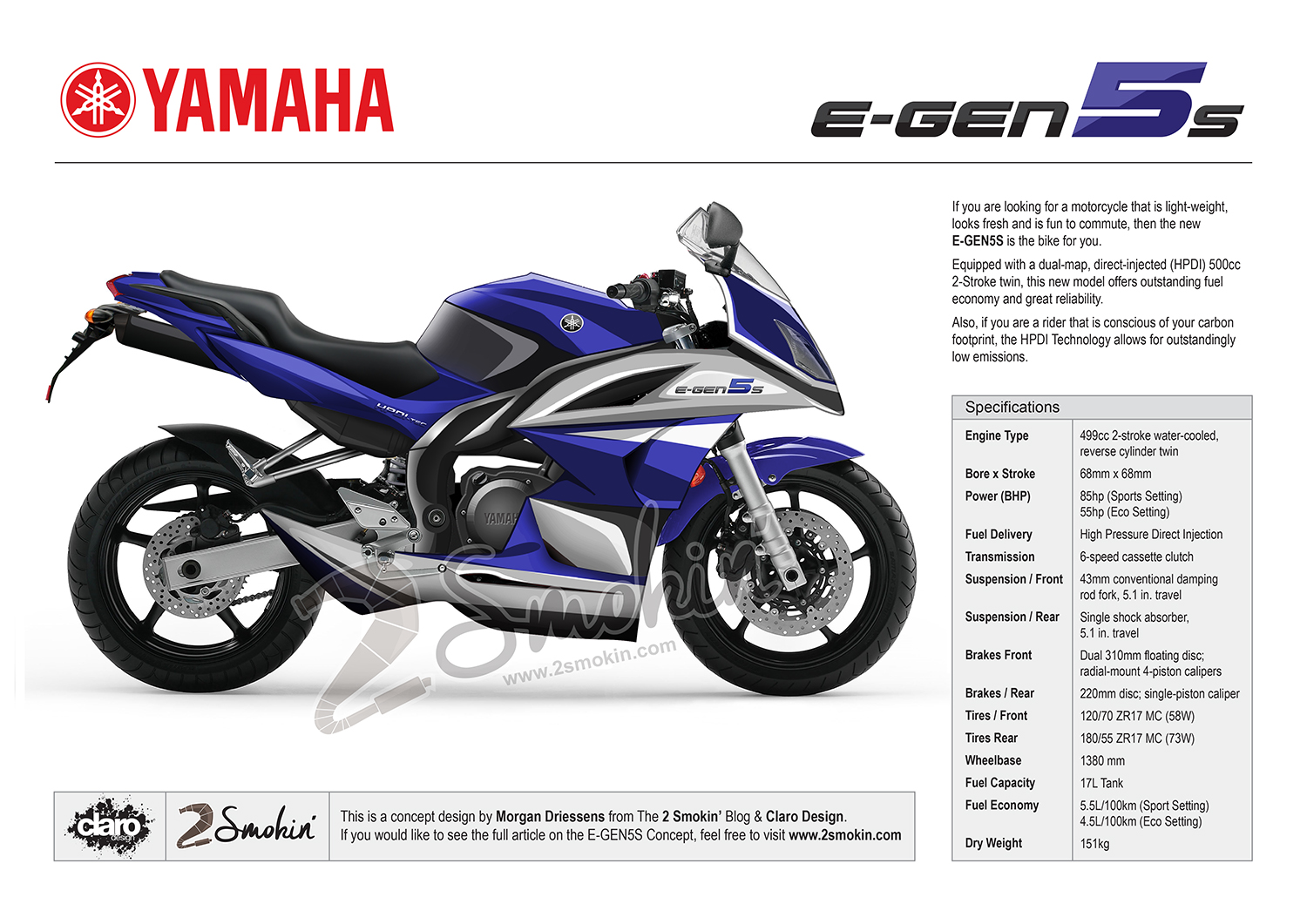 On the other hand, this is my interpretation of a lower cost, commuter version, the Yamaha E-GEN5S. This bike would feature fantastic mileage, aimed at competing economically with other affordable motorcycles, such as the Suzuki GS500 and the Kawasaki Ninja 500. It would offer a more relaxed seating position for the rider and pillion, but still maintain the sharp styling of the Yamaha range by sharing various suspension and handling parts with the FZ6. Also featuring the dual-mapping system, the S model would be a slightly detuned, quiet, confidence-inspiring model, with the potential for much more in the power department.

The beauty of both bikes is that not only could they be reliable, cheap to rebuild and economical, but they would also solve the emissions dilemma. Overall, no one will know if an affordable street bike smoker will ever hit the market again, but it never costs a cent to dream!